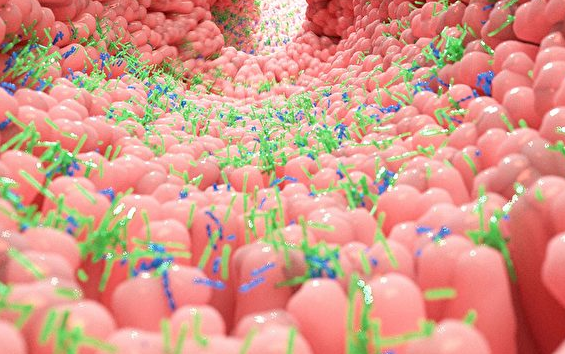 Schematic diagram of the microbial environment in the human intestine.

tags : protein , microbes
[Epoch Times, August 20, 2019] A new study by Stanford University found that human microbes produce more than 4,000 protein species that were previously unknown. These proteins are small, each with a length of less than 50 amino acids, which scientists believe are important for human health and the development of new antibiotics.

The human body is like a complicated world in which there are trillions of bacteria. A large body of evidence shows that the health of the human body is inextricably linked to the composition of these bacteria and the robustness of the lines of defense. Scientists still don’t know exactly how they work.

Researchers at the Stanford University School of Medicine have discovered that these microbes in the human body produce thousands of tiny proteins that scientists have never noticed before. They believe that these proteins play an important role in competing for priority among different strains in biological systems, between bacteria, between them and their hosts, and in maintaining the daily health and optimal state of bacteria.

These proteins are each less than 50 amino acids in length. Ami Bhatt, the lead author of the study, believes that they are likely to form the basic material that scientists have not previously known in their unique shape, and that they have many functions, including acting as a “biological switch” for micro-bacteria, helping micro-bacteria in different functional states. Switching, as well as exciting specific responses to other cells, and the like.

To find these tiny proteins, the researchers amplified the bacterial genome.

Only a certain part contains the information needed to make a protein,” Bhatt said. “Usually, we look for the words ‘starting’ and ‘ending’ in the book. Intergenic gene code. This method is suitable for larger proteins, and for smaller proteins, there are many uncertainties in the results obtained.”

By comparing the results of multiple iterations, the researchers found 4,539 small proteins. “To be honest, we don’t know how many we will find,” Bhatt said. “We have no expectations for this. We have found thousands of new proteins, which surprised us.”

Researchers are now further identifying the role of these proteins. For example, by understanding the role of proteins in the competition of intestinal bacteria in the intestinal space and how to fight drugs, new antibiotics can be invented for related proteins.

“They are easier to study and synthesize than larger proteins and can promote drug development. We estimate this will be a valuable area of   research in biology,” Bhatt said.